What an amazing weekend out at Goodwood for the 75th Members’ Meeting. Founded by Lord March, the annual Members’ Meeting was created with the goal to recreate the atmosphere and camaraderie of the original BARC Members’ Meetings held at Goodwood throughout the 1950s and 1960s. This is the first automotive event of the year on the Goodwood property and instead of the packed 200’000-strong crowd that you’ll find at the Festival of Speed, this event was planned for a pleasantly-sized 20’000 person crowd. This friendly and intimate atmosphere gave us a chance to have a better view of the cars and the grounds without all the waiting and the stress and it sure was worth it.

For the occasion, hundreds of thousands of daffodils were carefully planted around the premises to create a landscape worthy of a fairy tale with themed bars and restaurants and plenty of outdoor games for children and adults alike. For the hardcore petrolheads, races took place from the early sunrise up to the sunset with cars ranging from fire-spitting pre-war monsters all the way to the famed GT1 series McLaren F1, Porsche GT1, Ferrari F40 LM and Mercedes CLK GTR.

Luckily, despite the expected cloudy sky, we were gifted with a rainless weekend to fully enjoy the automotive fun. Families were abundant and the younger generation pranced around the paddocks in awe when confronted to all the present beauty. Cars from nearly every side of the world were present with the British classics, American muscle cars, exotic Italians and even the lonely single Japanese Mazda RX7 and the Japanese motorbike invasion. 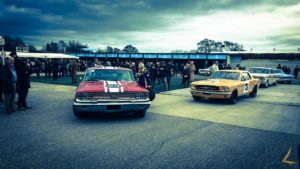 Rare are the occasions where you can actually see most of these cars driving, and rarer are the occasions where you can see Pink Floyd’s drummer Nick Mason crashing a multi-million dollar McLaren F1! That wasn’t the only crash of the weekend though. The racers were going the hardest they could, making it sometimes feel as if they had suddenly forgotten the value of the cars they were driving. This led to some close calls between Aston Martin DB4 GTs, Ferrari 250 GTOs and Jaguar Lightweight E-Types which made the races even more addicting.

The racers were going the hardest they could, making it sometimes feel as if they had suddenly forgotten the value of the cars they were driving. 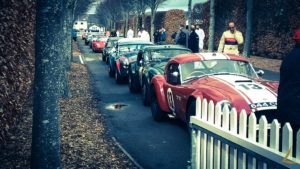 This was my first visit to the Members’ Meeting and it has now become my favourite yearly event to take place, both for the sheer variety of races and activities planned, and also for the intimacy it proposes which allows for a more personal experience around the cars and more genuine conversations with the racers and owners. I’ll now leave with all these great memories and wait impatiently for next year’s event to take place, but in the meantime, we’ll have the pleasure to make a trip back to Goodwood for the upcoming Festival of Speed!

If you want to see the other pictures from the event, head on over to our Facebook page and see our full album of the weekend by clicking HERE and don’t forget to follow us on Instagram, Youtube and Facebook to keep up with our next adventures!