Once a year, the avid car aficionado, with his burning nostalgia is treated to a feast for his eyes. This treat takes place in Paris and is called Retromobile. A whole weekend dedicated to commemorating cars of the past, where design was still at the forefront and regulations were still barely present. A chance for the new generation to flee the big expensive booths of modern day car shows and plunge into the world of vintage cars while the older generation gets a nice look into the past where cars were still about the experience and not just going from point A to point B. 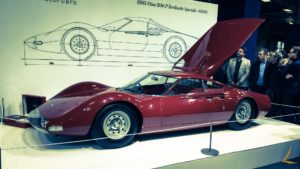 So we immediately found ourselves running towards what we saw as the main event. Artcurial was hosting it’s Retromobile auction and had a whole collection of vintage and retro dream cars such as the original 1965 Dino Berlinetta Speciale Prototype by Pininfarina (which sold for €4’390’400.-), the 1948 Ferrari 166 Spyder Corsa by Scaglietti (which sold for €2’960’400.-), a couple Lamborghini Miuras, the unforgettable Mercedes 300SL in both coupe and cabrio, exotic Bizzarrinis, Delahayes and many more that you can find here.

We then urged ourselves towards the overhanging passage way separating the exposition halls, where a huge selection of the famed Group B Rally cars were displayed. These cars were some of the most extreme four-wheeled vehicles to have ever competed in racing events until being outright banned for making some of the most dangerous racing experiences.

For a bit of history, Group B was introduced in 1982 as a replacement for Groups 4 and 5 in the World Rally Championship, representing Modified Grand Touring cars, at least 200 of which were produced of each model. In the very early 1980s, Group B was the rally queen category: giving engineers a great deal of technical freedom and gaining a reputation for their phenomenal power output – in excess of 600 hp (the Audi Quattro Sport S1 E2 delivered 600 hp), for less than a tonne!

Sadly, the ever-increasing popularity of these power monsters resulted in frequent accidents and so the Federation banned the category on 1 January 1987. 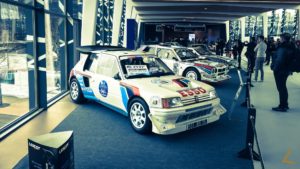 Group B was the rally queen category: giving engineers a great deal of technical freedom and gaining a reputation for their phenomenal power output

Our trip at Retromobile then continued and there was still a lot to see. We zoomed past a historical Aston Martin display, showcasing some of the most iconic models of the esteemed brand’s history and were then treated to a lovely sight of rare Ferraris on a display celebrating the brand’s 70th anniversary. 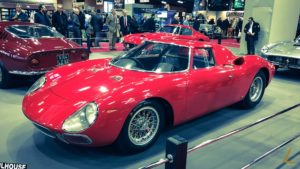 The show didn’t stop here, we shifted our focus for a little moment to stop and have a look at the little independent booths selling everything from spare car parts, to books, to model cars. If I didn’t have as much self-control, I could’ve probably spent hundreds or even thousands on memorabilia to bring home.

Before finishing our day, we stopped by and had some quick chats with the guys from JD Classics and Fiskens to see what cars they had brought along this year and we had the pleasant surprise of walking past the extremely rare and divisive Ferrari 250 GT SWB Breadvan. 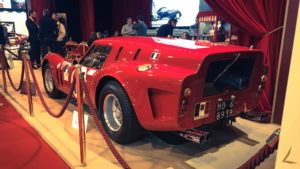 Our year is going to be full of surprises and adventures so to see all of the pictures from this year’s Retromobile, click HERE and don’t forget to follow us on Instagram, Youtube and Facebook to keep up with our next adventures!